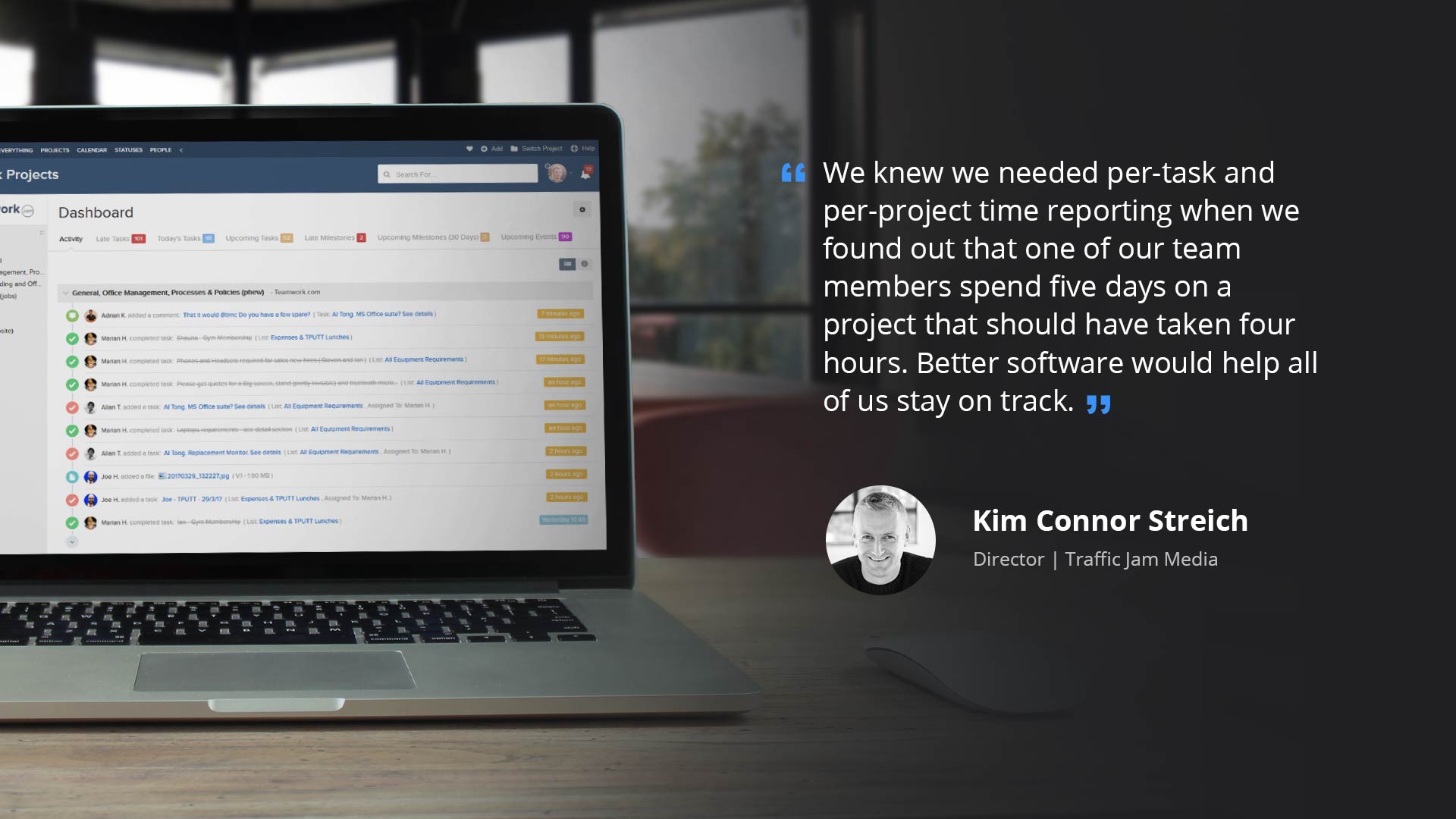 Traffic Jam Media manages multiple projects and clients each day, and like many other agencies, it needed software that did more than help them plan and organize projects. They needed a system that could collect data and produce accurate, user-friendly reports on how team members were spending their time.

Many of the programs they trialed could handle one or two of the aspects they needed, like lists of tasks assigned to different team members, but none had the capacity to track recurring tasks, keep on top of deadlines and track time. Others were too difficult to use in a fast-paced agency.

“We tried a few project management tools before and struggled with adoption. The teams found them difficult to implement and generally moved back to Excel as the main form of tracking time and projects.”

Spreadsheets provided an accurate method to track time, but they were far from ideal, especially for client updates and communication. Kim and the entire team wanted a better way to provide maximum project transparency with their clients, so they kept looking for software that could provide it.

They felt more pressure to fix the problem when they discovered that all too often, often team members were missing the mark on time allotted for each project. Occasionally, team members were making sure clients got all the time their allocated time, but more often, they were getting so caught up in tasks that they would double or triple the time they had budgeted.

“We knew we needed per-task and per-project time reporting when we found out that one of our team members spent five days on a project that should have taken four hours. Better software would help all of us stay on track.”

The first problem Kim didn’t have when he introduced Teamwork Projects to his team was onboarding. The Traffic Jam Media staff was initially skeptical since they’d tried so many other tools, but once they test drove it for a few days and checked out the library of online tutorials, soon they were finding new features that simplified their workflows.

Custom projects were easy to create with the intuitive UI, and the recurring task list feature let Traffic Jam Media instantly set up recurring tasks, or even segments of projects, that were identical to previous projects. Once the projects were constructed in Teamwork Projects, it was easy to share them with clients, who could follow progress or generate a status report without a lot of training.

“Some people were initially resistant to learning Teamwork Projects, but having key people talk about their enthusiasm for Teamwork Projects made these issues disappear. Because we love the software so much, it’s easy for us to train new hires or teach clients how to use it.”

The team adopted the time tracking feature very quickly and were soon using it to monitor their own billable hours, carefully comparing their time logged to the estimates attached to each task. Even before team leads could identify potential billing overruns, team members were pinpointing which activities in their workflows were chronically inefficient and which had a great ROI on their own.

Teamwork Projects has several integrations with well-respected time-tracking apps, and Kim has considered using one like Xero. He recently decided to keep things simple and stick with the built-in time tracking features in Projects, which give his all the features he needs for the retainer-based billing his company uses.

With Teamwork Projects, Traffic Jam Media now has a better handle on their project estimates and budgeting process, all because of the precise time tracking tools. In the earliest stages with a client, they have the confidence of knowing that their cost forecasts are accurate based on analysis of past projects.

Throughout the duration of their projects, team members can quickly identify when they’re spending too much time on a task or phase of a project and make the necessary corrections. This feedback loop has given Kim the ability to add extra team members or reduce the workload, depending on the situation. Traffic Jam Media has even been able to request and win increases to their retainers based on the data that the time-tracking tools have provided.

“The time tracking tools have definitely refined our understanding of internal time commitments and how we can effectively respond to them. Before Teamwork, important work just fell between the cracks, and we couldn’t figure out why it wasn’t getting done.”

Clients are impressed with Traffic Jam Media’s results, which are on time and within the agreed-upon budget — and with fewer unanticipated problems. In every project, team members, and clients are able to communicate smoothly throughout the project, giving everyone greater confidence about accomplishing their goals on every level.

“If you can’t measure your performance, you can’t improve. Teamwork Projects has given us the tools to analyze and innovate in ways we weren’t able to see before.”