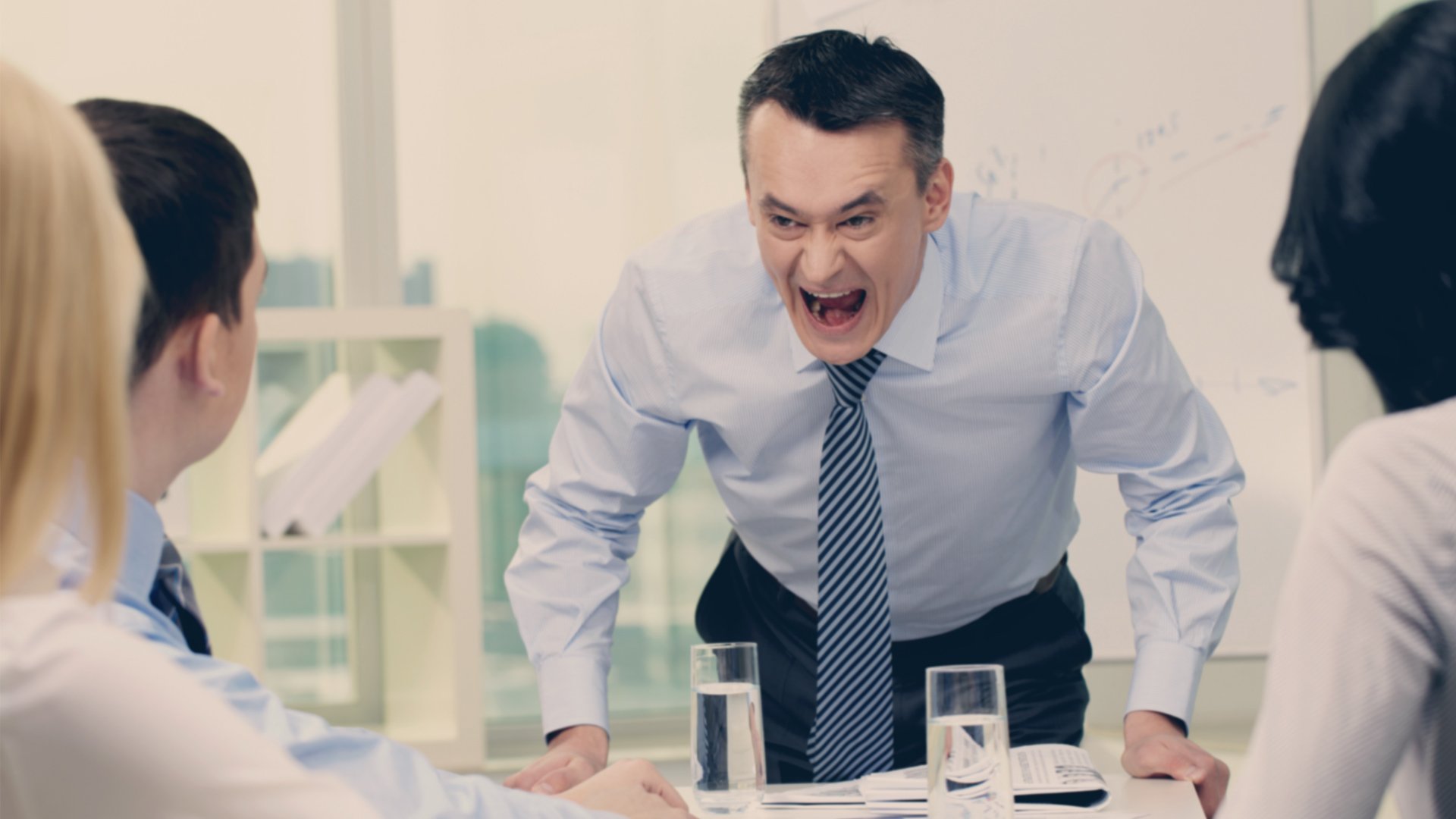 Congrats, you’re a bad leader. Chances are you don’t know it, of course. You probably think that in your cocooned world you have what it takes, that you are a high achiever, and while everyone may not love you, they respect you.
“You do not lead by hitting people over the head — that’s assault, not leadership.”
– Dwight Eisenhower

Think again. Here’s what you are doing wrong:

1. You don’t have any empathy

You confuse the word with sympathy, something you also lack. You don’t really connect emotionally to your team on a personal level, and don’t understand their needs at work, such as resources and training. Since you are so obsessed with being a bad leader, you cannot put yourself in someone else’s shoes. Good luck with trying to earn their respect.
“Leaders with empathy do more than sympathize with people around them: they use their knowledge to improve their company in subtle, but important ways.”
– Daniel Coleman

When a deadline is missed, or a plan goes awry, you look for scapegoats. It wasn’t your fault, obviously, so you lay the blame on others. Pretty soon you earn a reputation for evading responsibility. Your team gets the message, although not the one you hoped for. Expect morale to take a pummeling.
“True leaders take responsibility while false leaders blame.”
– Jeffrey Benjamin

3. You live in fear of change

Anything that upsets the status quo is your enemy, and you will oppose it to the death. New systems or work practices are anathema to you, and you will delay or sidetrack their implementation at every opportunity.
“We can’t be afraid of change. You may feel very secure in the pond that you are in, but if you never venture out of it, you will never know that there is such a thing as an ocean, a sea.”
– JoyBell C.

4. A master of indecision

People keep pestering you to make decisions, but you keep putting off the evil day. What are deadlines for except to be missed? You find even the simple things hard to make a ruling on. You keep looking for excuses – and finding them. In your world, tomorrow never comes.
“Strong leaders understand that action cures indecision”
– Toyotomi Hideyoshi

You can’t help yourself. Your every action says ‘look at me! I’m the boss here”. You’re in charge but you must show off your power so everyone knows who is in charge. Too bad if it rubs your staff or team up the wrong way.
“A leader is admired, a boss is feared.”
– Vincente del Bosque

People want your time, but when you grant them an audience you’re not really fully engaged, and rarely deliver on what you do promise. You sit at meetings, but rarely take in what people are saying.
“When people talk, listen completely. Most people never listen.”
– Ernest Hemingway

You delight in tearing apart other team members’ proposals because you can, and also because you get your kicks out of it. You perceive any idea or suggestion as a threat to your position and your authority.
“Leaders don’t inflict pain, they share pain.”
– Max Depree

8. Your mind is closed

You call a meeting to discuss an upcoming project and assure everyone you are open to any ideas or proposals. You have no intention of keeping your word, of course. You allow the meeting to ramble on and make suggestions, but fter all, what do they know?
“Don’t find fault, find a remedy.”
– Henry Ford

You specialize in being a bad communicator. You fail to inform everyone about meetings and decisions, or to clarify peoples’ roles, and then act surprised when they don’t understand.
“The art of communication is the language of leadership.”
– James Humes

You say one thing but do the other. One day you set a target, the next day you move it. You dismiss a proposal, then a week later decide you like it after all. That’s the power of being a bad leader, even if it  baffles everyone on your team.
“Consistent action creates consistent results.”
– Christine Kane

11. You have an abrasive style

You are overbearing and domineering, arrogant and inconsiderate – four nasty behavioral traits that fill you with happiness  but strike fear and loathing into all around you. You don’t notice how offputting your behavior is, just that it makes you feel superior.
“The challenge of leadership is to be strong but not rude; be kind but not weak; be bold, but not a bully; be humble, but not timid; be proud but not arrogant; have humor without folly.”
– Jim Robin

You excel at switching people off because you know how to demotivate them. It takes little effort on your part to disengage your team (as we have seen from the earlier points), but you seem to find new ways every day. You are the Great Demotivator rather than the Great Leader, and right now those who can are planning to rush for the exit.
“As we look ahead into the next century, leaders will be those who empower others.”
– Bill Gates

13. Creates culture of distrust and fear

You build a climate of fear in the office every time people see you. You can almost hear the groans. You are widely distrusted, but mostly you are feared because you have power, and the  ability to affect their daily working lives and careers.
“Good leadership requires you to surround yourself with people of different perspectives who can disagree with you without fear of retaliation.”
– Doris Kearns Goodwin

14. You can’t accept responsibility for mistakes

Everyone makes mistakes, as you constantly remind everyone else, except you. Your great master plan to hit higher targets, or reach project deadlines, comes asunder, but you don’t want to admit you erred.
“If we fail to learn from our trials and errors then we truly fail.”
– Lindsey Rietzsch

No matter how well your team performs you don’t bother to recognize the results. If someone goes above and beyond expectations you fail to reward it. Pretty soon you have built a bad reputation and no one will work outside their comfort zone.
“People work for money, but go the extra mile for recognition, praise and reward.”
– Dale Carnegie

If you share all these bad leadership traits you’re well on the way to excelling as a poor leader. Take action to remedy these defects and you’ll soon win the confidence and support of your team, and motivate them to perform.