How The Bigger Boat centralizes client work with Teamwork

For The Bigger Boat, coming up with traditional marketing campaigns for their clients just doesn’t cut it. “We like to say we’re an extension of our client’s marketing team,” said Andy McCaul, the agency’s Managing Director.

Whether a client is struggling with their brand strategy, ranking high for SEO, or increasing their revenue, the team at The Bigger Boat approaches their work a bit differently than the average agency: their modus operandi is to creatively collaborate with their clients, rather than force a particular vision upon them.

“Ultimately, it's less of an agency-client relationship, and more of one team trying to make the entire business better,” Andy said. “The dream for us is when a client says, ‘We view you as part of our marketing team.’”

Founded by a team of three in West Yorkshire in 2010, The Bigger Boat has grown from its modest beginnings to a full-service integrated marketing agency with a team of more than 20. Working within a wide breadth of sectors within both B2B and B2C, The Bigger Boat focuses on both retainer work and one-off projects for clients.

But it’s their commitment to adventurous, out-of-the-box thinking that makes their work for clients like Little Tikes and Ecolab stand out. And as Andy sees it, that work wouldn’t be possible without a project management solution to keep the entire team aligned and accountable. 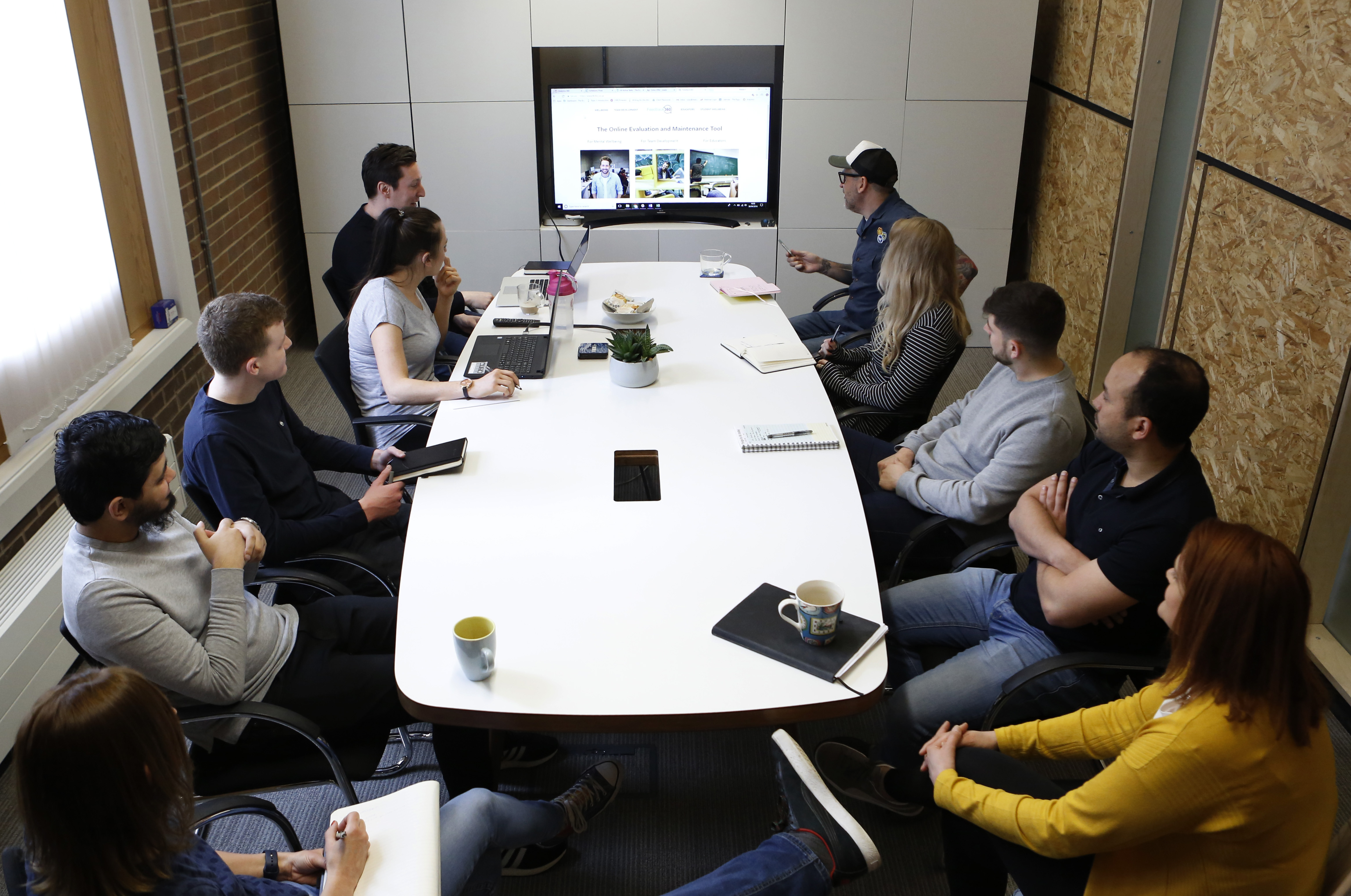 When you’re an agency that depends on cross-team collaboration as your bread and butter, a basic solution isn’t going to cut it. Andy and his team found that out for themselves as the agency started to grow at increasingly faster rates. Their burgeoning team, which used to rely on tools like Basecamp and Project Bubble for their day-to-day work, could no longer rely on solutions that only did a few things well.

Enter Teamwork, which The Bigger Boat has now been using for the past 8 years without ever looking back. “We were looking for something a bit more in-depth that we could adapt like an end-to-end system,” Andy explained. In contrast to other tools the team was using at the time, Teamwork is a platform that’s specifically built with client work in mind, something that immediately resonated with Andy.

More than that, it was easy to get the entire Bigger Boat team using the Teamwork platform. In fact, Andy still looks for ways to keep all of the team’s work centralized within the platform, whether it’s for a one-off project or using Teamwork Chat in place of Slack. “There’s just fewer places to have to [keep track of work],” he said. “We really try to reduce our work down to asking, ‘Can we keep it in Teamwork?’” 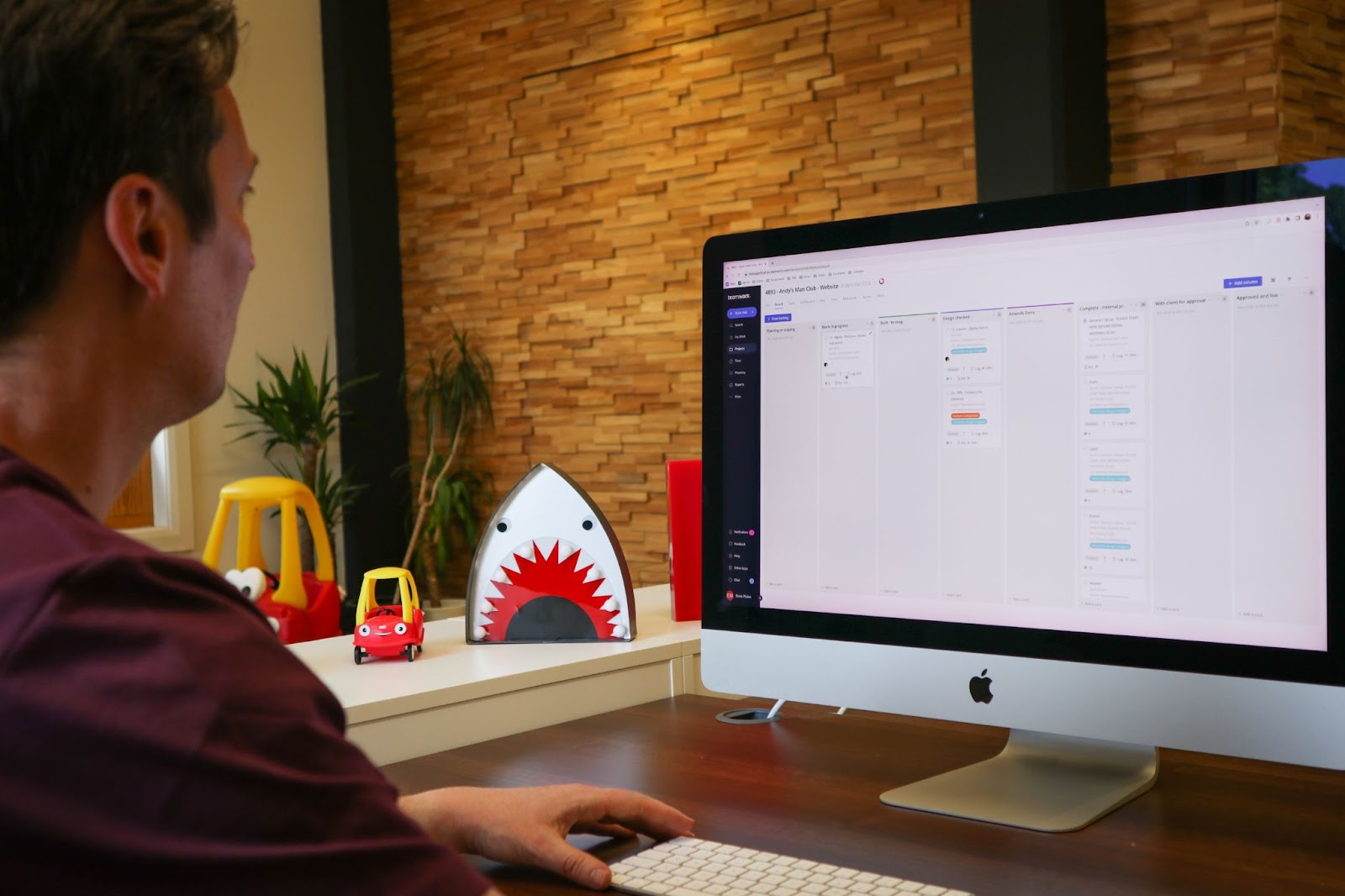 Using Teamwork across the entire team

Because everyone uses Teamwork in some capacity at The Bigger Boat, getting team members accustomed to the ins and outs of the platform is key. “Whether you’re a planner or a doer, you’re going to be using Teamwork equally,” Andy said.

The agency uses task list templates for onboarding that they can tailor to individual roles as new teammates join. From day one, new members are set up for success within Teamwork. “I’ve never had anyone come to me after joining and say, ‘Can someone spend a day with me in Teamwork because I don’t understand how to use it.’ Everyone understands the fundamentals [of the platform] during their first few weeks here,” Andy said.

The agency even uses Teamwork to develop each team member’s individual development plan, proving their dedication to keeping as much of their work in one location. “We just thought, ‘What's the point of having everyone's personal development in another system when everyone is in Teamwork every day?’ The last thing we want is to have to deal with more subscriptions to other tools,” he explained. 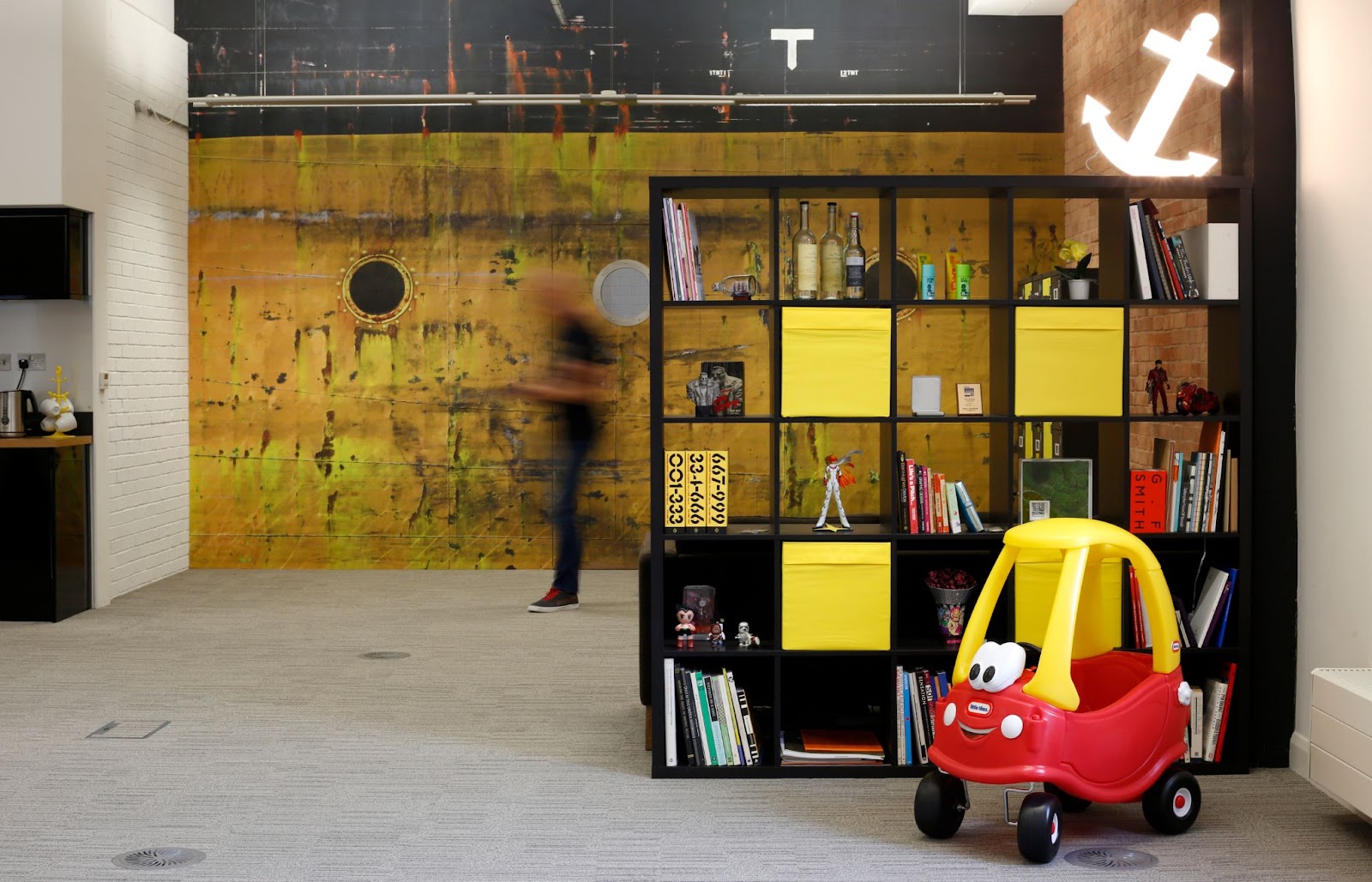 Features that make life easier for the agency—and their clients

Andy spends at least some part of every working day in Teamwork, thanks in part to the variety of tools and features that help him accomplish a wide array of tasks. One day, he might be looking into retainer management to see where the agency’s hours are being spent in comparison to what they’ve budgeted. Other days, he might drop into a task that’s behind deadline to check in on how the overall progress might be improved.

For the team as a whole, the agency has implemented a system that keeps the chain of work clear and seamless. Once someone is assigned a task, it’s that person’s responsibility to close out the task via the comments after it’s completed. Whether someone’s sharing a link to the finished project, or simply closing the loop to let everyone on the task know it’s finished, this virtual pattern keeps the team aligned and on track.

Beyond this system, time tracking is a major focus for Andy and the agency. “It’s not so much about keeping track of what everyone’s doing, but more that we want to know if we’ve quoted the job accurately,” he said. “Websites are the most complicated jobs we do, and what we’ve realized from using Teamwork is that we weren’t quoting that work correctly. Now, it’s helped us change the way we quote those kinds of jobs.”

Because time tracking can be tricky for any agency, Andy encourages his team to do it in the moment by clicking on the task they’re working on, setting the timer, then starting the task. This works particularly well for certain job functions where a task can be focused on for longer periods of time. But things get more difficult for project managers who are constantly switching between tasks.

“If people forget to turn the clock on, we ask them to look at their time logged each day just to check that they’ve added billable or non-billable time to the right project and task list,” he explained. Even if team members forget to log time, the management team still reviews time logged every week to make any adjustments as needed.

Teamwork also makes drilling down into the agency’s finances and profitability easier to keep an eye on.

“By getting better at managing projects, separating task lists, and tracking time, we were able to look at the overall profitability and see where we could improve."

“It helped us see where we had gone wrong previously and what we could do about it, so being able to keep a handle on the finance piece is a massive feature for us," Andy said.

Project templates also come in handy to make the complicated nature of website work repeatable—and customizable—for the team. “We spent a lot of time figuring out what tasks should go in which order, and we’ve even included helpful notes along the way,” Andy said.   “In theory, anyone should be able to walk through the door and manage a website job just by using that template in Teamwork.”

Because of this airtight system, Andy says there’s been a reduction in the number of last-minute issues or questions related to website tasks. “We try to create consistency between how we use Teamwork, because consistency means you can easily drop into someone else's job,” he said. “Whether they’re sick or out for the day, the show still goes on, so being able to drop into Teamwork helps everyone see what’s going on.”

According to Andy, even though every client that comes to The Bigger Boat brings a unique request, the agency’s process should, in theory, be the same. That’s especially where Teamwork’s capabilities shine. “In one sense, Teamwork is kind of an open-ended system,” Andy said. “You can adopt it and decide how you want to run it yourself. And you can make every decision on your own about how you want to do things, which is brilliant.” 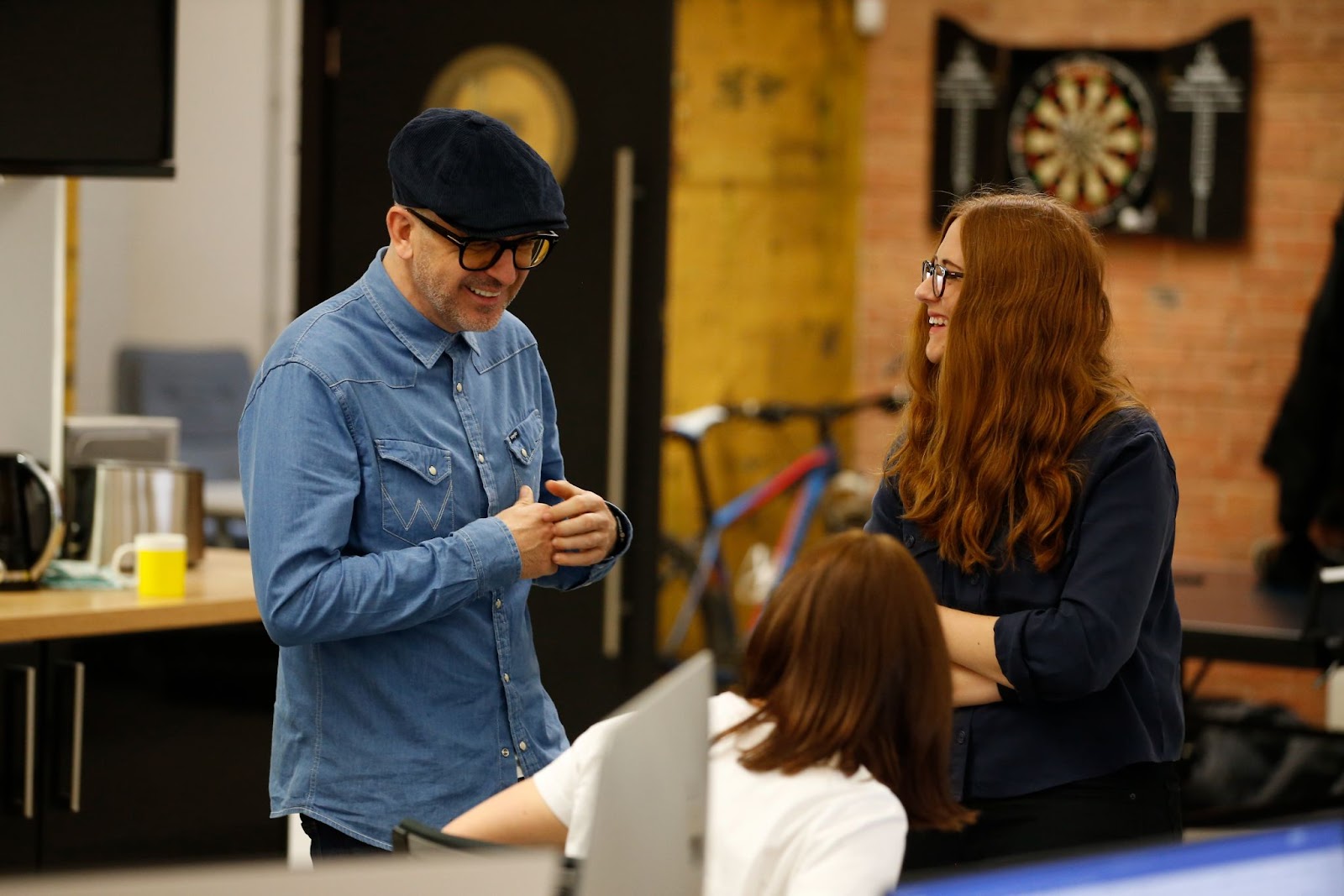 For Andy, one of the most reassuring aspects of choosing Teamwork has been the long-term payoff. As The Bigger Boat has grown exponentially over the past several years, so has the Teamwork platform. It’s the type of product growth the agency was craving while they were using Basecamp and Project Bubble. Andy and his team have seen multiple feature requests and enhancements come to life based on feedback they’ve provided, which has saved them the costs of having to adapt new systems.

“Our preference would definitely be that [the platform we already use] gets better and better each year, which is something Teamwork is really good at,” he said. “Over the years, I've noticed that there's clear communication with Teamwork’s development roadmap—what features you’re adding, how quickly people are to respond. . . . I think those are the things that have made us return to Teamwork, and in a way, it feels like Teamwork has progressed as we’ve progressed.”

Back to customer stories