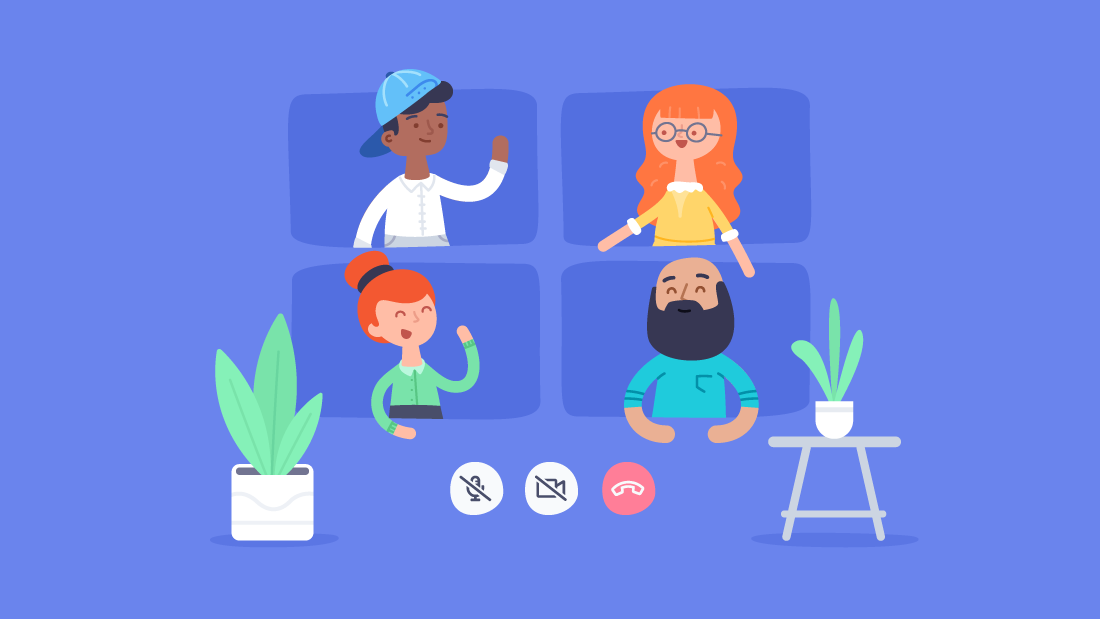 From the lowest cost of living to the highest salaries, best weather and internet, and meal costs these are the best cities to live in if you have a remote job and want to get more bang for your buck.

The great resignation isn’t going away any time soon and neither is the option for office employees to work from home – even post-pandemic. While U.S. employees are being asked back into the office, many are reconsidering their current job and seeking alternative options, which is visible in the fact that searches for remote work have increased by more than 4,400% in the past five years.

With employees more eager for a blended working approach than ever before, project management software popular among remote teams, Teamwork, has put together some data on the best U.S. cities for remote work.

Teamwork looked at the cities with the lowest rent, best-paying wages, and even the cost of a beer or three-course meal for two to find the best and most affordable cities to consider moving to if you’re working remotely.

Cheyenne, Wyoming is top of Teamwork’s leaderboard with the lowest cost of living score and an average monthly salary of $5,166 locally. 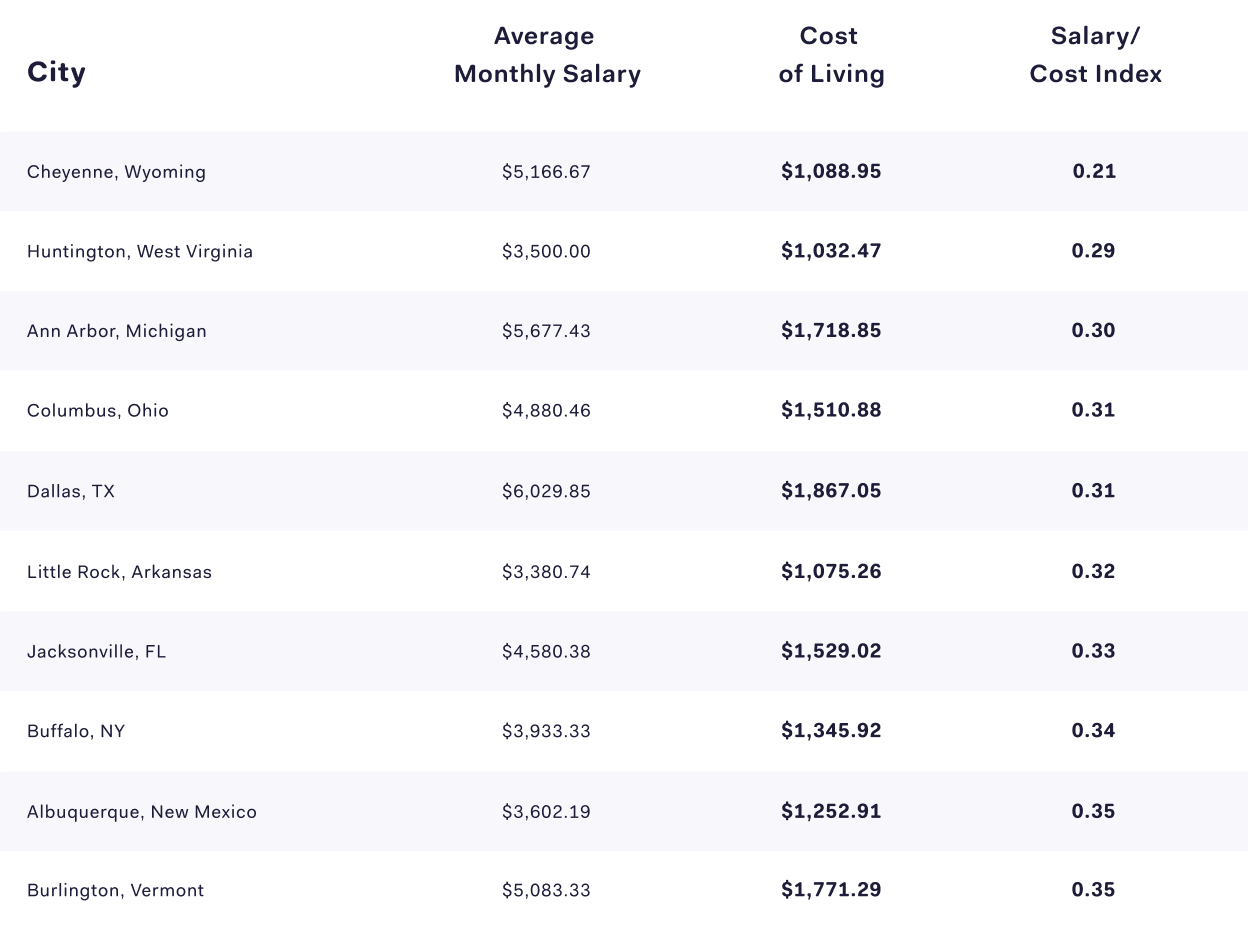 The ranking is based on a number of factors, such as the cost of renting a one-bedroom apartment, a meal in an inexpensive restaurant, a 3-course meal for two in a mid-range restaurant, monthly internet, gym membership, transport (monthly pass), a beer in a local bar, taxi cost per mile and the cost of a movie ticket, as well as a number of other local living criteria.

The other top five cities include some well-known college towns with Huntington, West Virginia ranking second with an average monthly salary of $3,500 and a cost of living score of $1,032, and Ann Arbor, Michigan placing third at $5,677 and $1,718.

Meanwhile, if you’re just on the hunt for the cheapest possible locations to rent a one-bedroom apartment while working remotely, cities that topped the list included Green Bay, Wisconsin at $780/month, Huntington, West Virginia at $785/month, Wichita, Kansas at $807/month, Little Rock, Arkansas at $815/month and Cheyenne, Wyoming at $862/month. 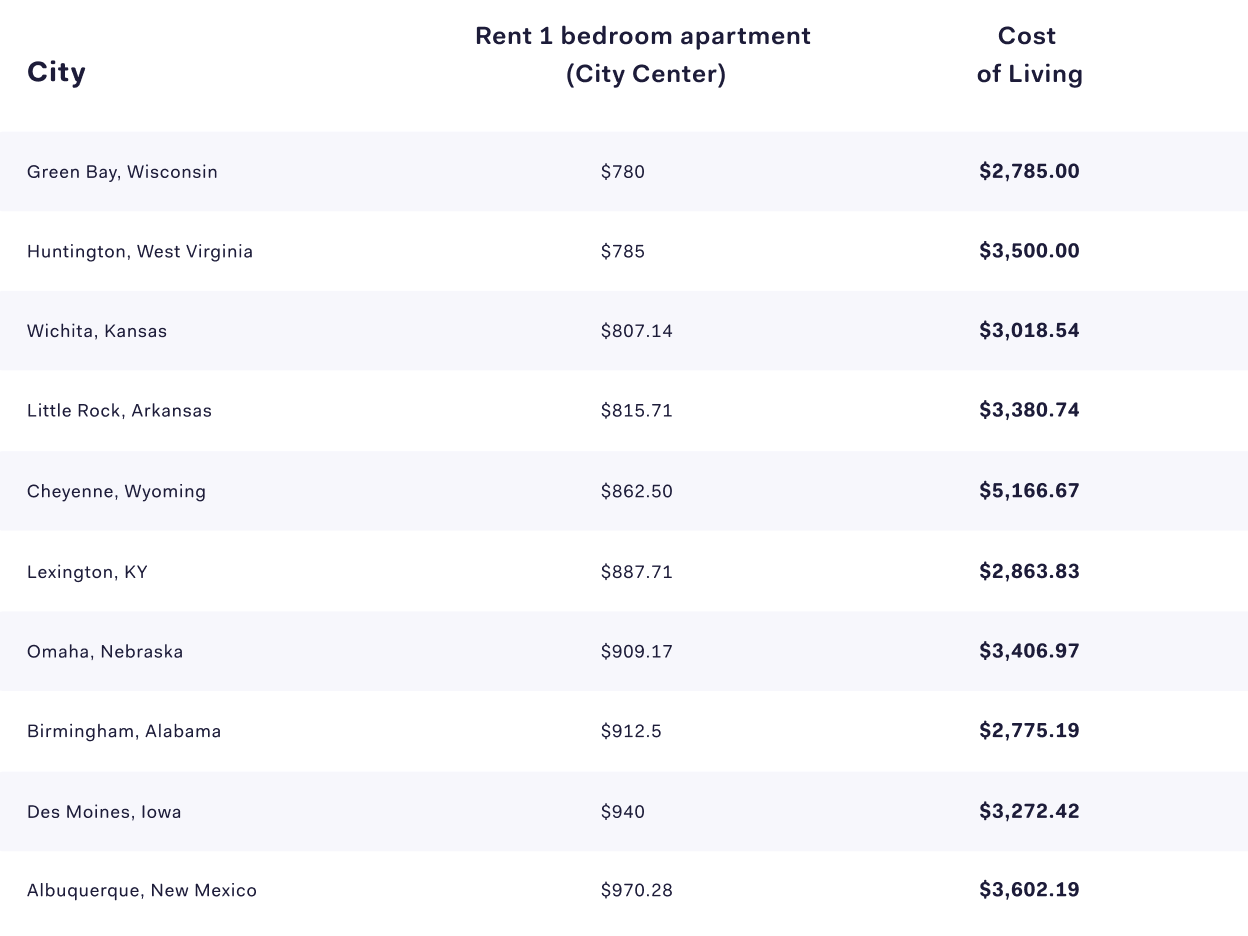 However, it’s bad news for anyone hoping to relocate to New York City, San Francisco, Boston, or Washington, D.C. All of these major metropolitan areas ranked in the top five most expensive cities to rent, followed closely by an unsurprising Los Angeles. 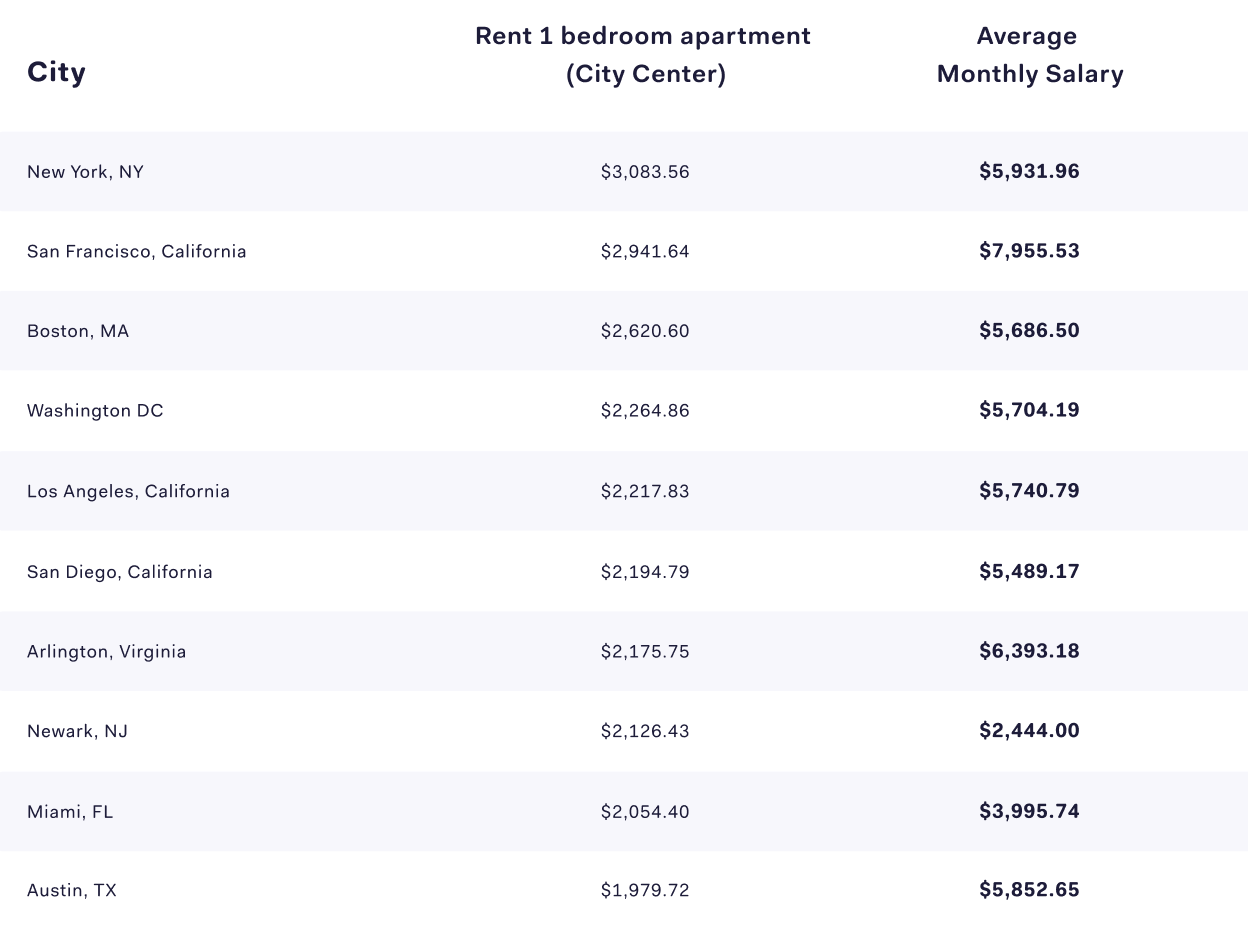 If you plan on trying to buy instead of rent, however, the below cities should be top of your list. 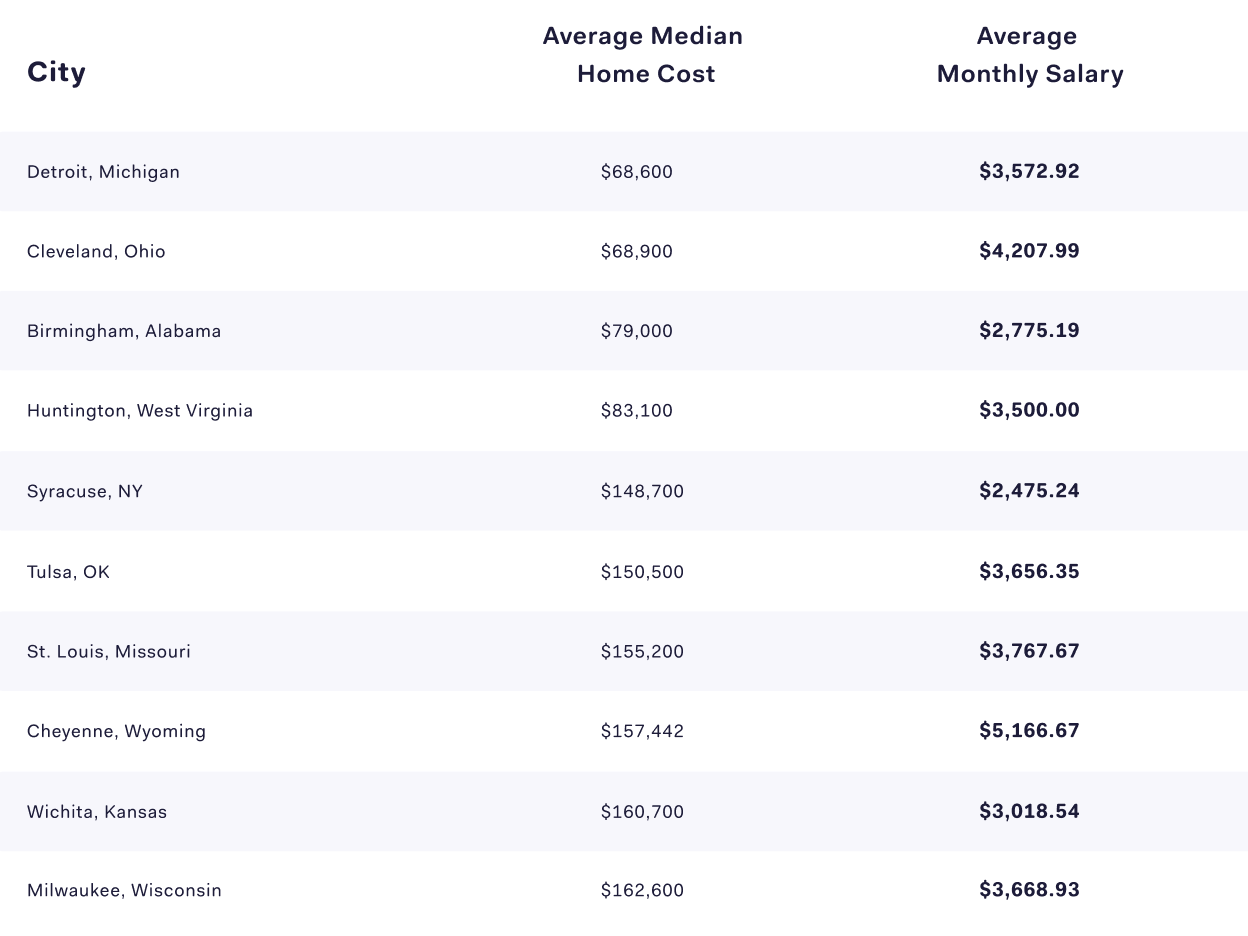 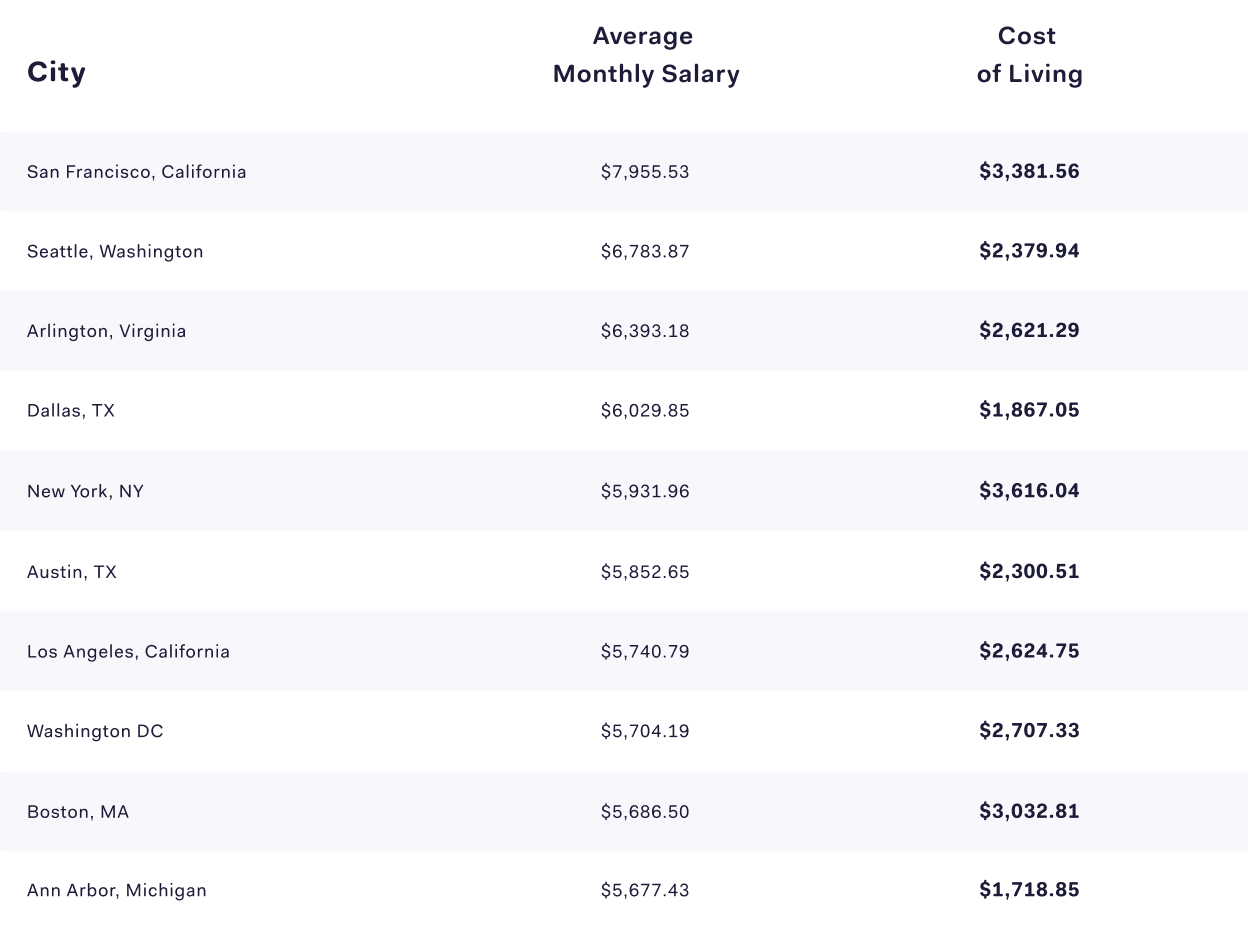 Teamwork also analyzed the number of remote opportunities available per industry, alongside the average salary for each industry and found that not only did IT top the leaderboard for the most amount of fully remote jobs at 97,976 but it also topped the list of highest average salaries at $82,500 per annum.

If you have plans to work permanently remote and take advantage of a higher salary but lower home cost, this is how much you would be able to request in a mortgage (estimation from NerdWallet’s calculator, no debt and a 20 years term):

And if good weather is at the top of your list for relocating requirements then Las Vegas (26), Henderson, Nevada (27), Los Angeles (34), San Diego (38) and Fresno, California (48) are probably your best options due to their lack of total rainy days per year.

On the off-chance you do need transport to the office (or anywhere else), Tbilisi, Georgia came in cheapest for taxi prices at $0.54 per mile, followed by Green Bay at $1.20, Aurora, Illinois at $1.50 and Fargo, North Dakota at $1.60.

If fine-dining is more your speed, Cheyenne, Wyoming has also topped the list of the cheapest locations to get a three-course meal for two at just $25. Also in the top five, was Savannah at $40, Chattanooga, at $42.5, Tennessee at $42.50, Huntington, West Virginia and Provo, Utah at $45.

If you’re looking for a beer to wash down those meals, then you might want to look toward Wichita, Kansas, which ranked as the cheapest city to get a beer at a bar at just $3. However, Oklahoma City, and Fargo, also have an average price of $3.

Meanwhile, Billings, Montana and Wilmington, Delaware both came in at $3.25

Speedy internet has topped the priority list for many remote employees, which is good news for those who live in Aurora where monthly internet costs ranked the lowest in the U.S. at $50.80 a month, followed by Cincinnatiat $56.68, Huntington $56.82, and Sacramento at $57.88.

Culture lovers, however, may want to look towards Huntington where the cost of a movie ticket is the lowest at $8 USD, which is followed by Provo at $9.25, Reno at $9.50, Omaha, Nebraska Sioux Falls, North Dakota both at $10.

The entire source data can be found here - https://docs.google.com/spreadsheets/d/1JdRV0dF_tT8Eea9sVCKQWlO1pktXFQdOj_5op6mytEg/edit?usp=sharing

Teamwork provides a comprehensive end-to-end SaaS platform for delivering client work with Project Management at its core. Teamwork’s customers track and manage their projects with a suite of integrated solutions such as helpdesk, collaboration, knowledge sharing, and customer relationship management add-ons, enabling Teamwork to be the ‘one-stop shop’ solution for business owners. Teamwork has offices in 5 countries and a global team of 270 employees serving over 20,000 businesses globally.