How to stop procrastinating today 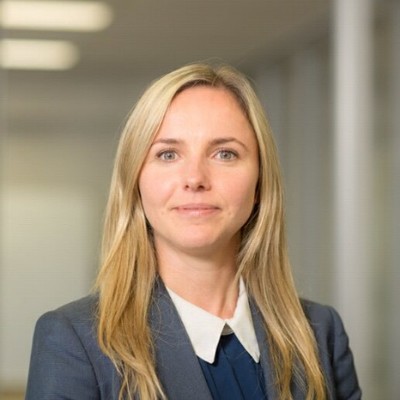 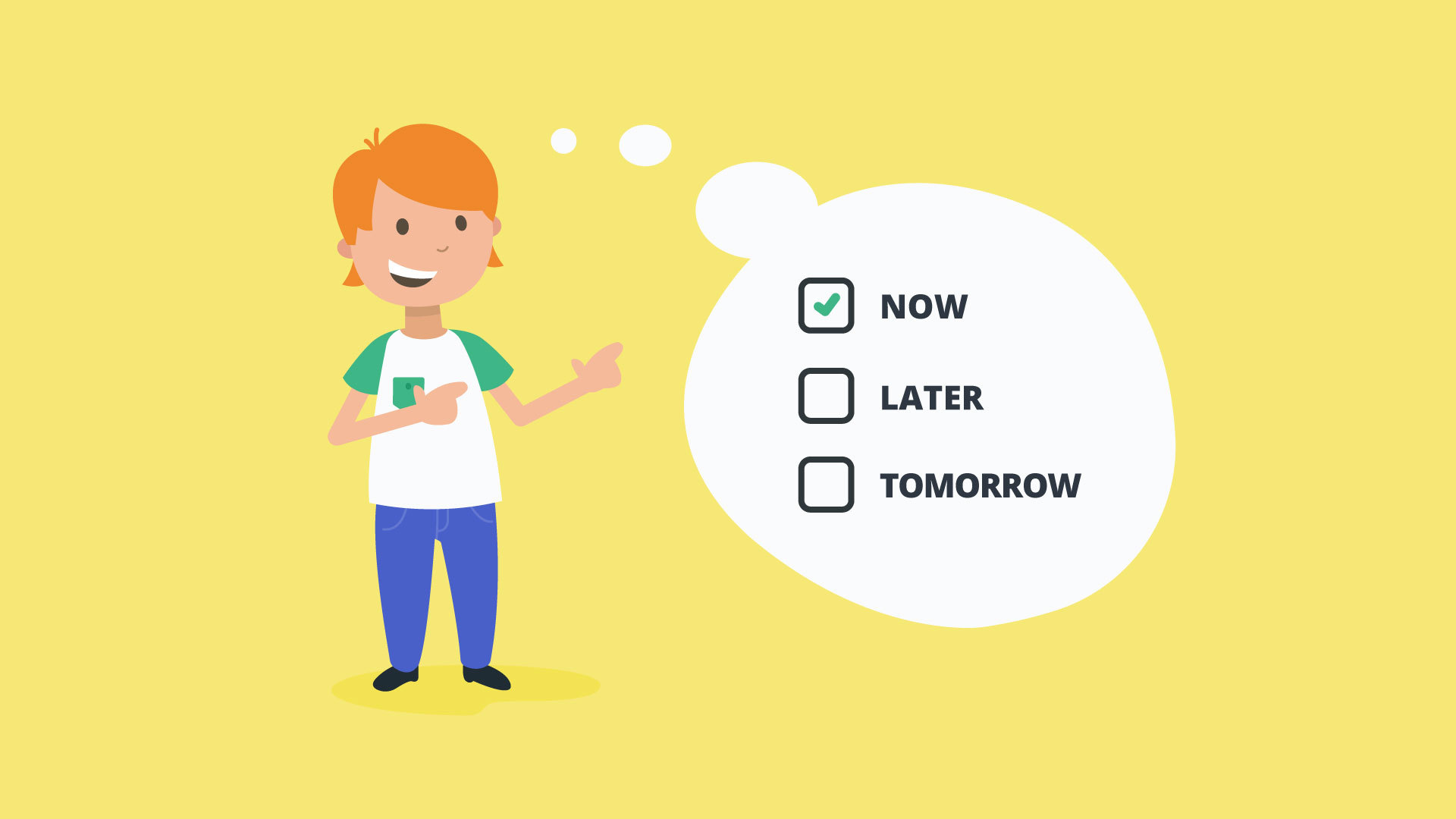 1. Get to know your procrastination triggers

Every time you catch yourself thinking things like “I’ll do that later,” or “Maybe I should read about bees for the next 40 minutes,” stop and ask yourself why you’re finding the task at hand so off-putting. Do this for a week, and no doubt you’ll start to see a pattern emerging. Timothy Pychyl, author of Solving the Procrastination Puzzle, has a great list of common triggers for procrastination. When we feel that a task is going to be one or more of the following, we avoid it like the plague:

Once you know the trigger(s) for your procrastination, you can start to address it. For example, if a task is lacking in personal meaning or intrinsic rewards, create your own by promising to treat yourself once you complete it. If it’s difficult or unstructured, ask the right people until you get the clarity you need, then make a plan with very specific steps. 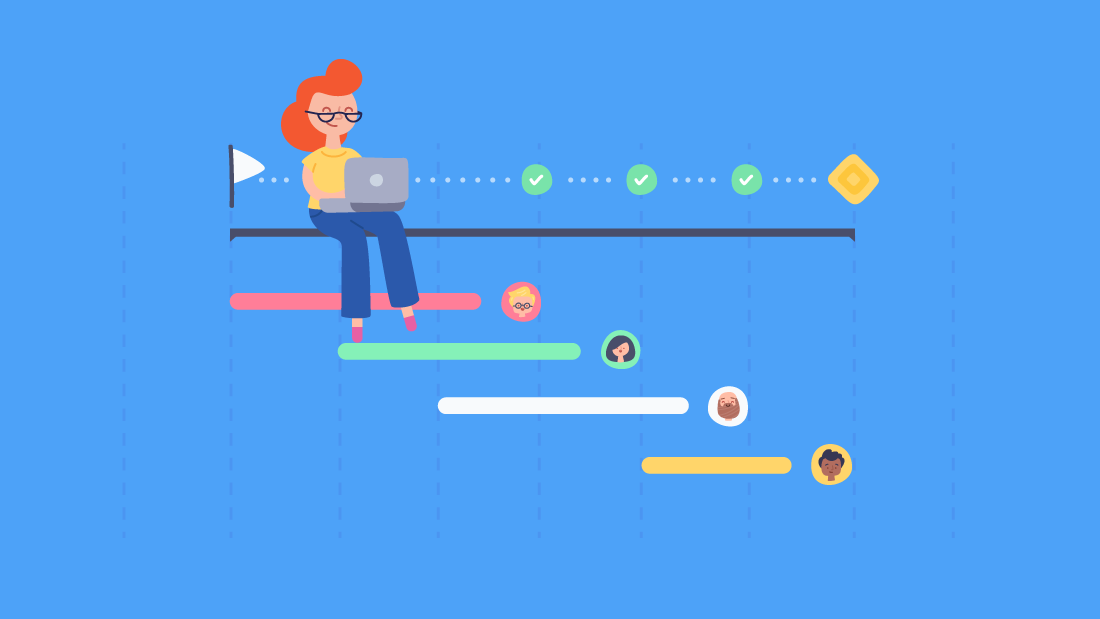 How to create a project schedule

Don't let project scheduling feel like a daunting task. Check out our guide to be prepped and ready to create a fully-functioning, smooth-running, project schedule.

You don’t have to be in the right mood to do a boring task. You just have to make a start. It’s like that age-old advice about making yourself go for a run: just lace up your running shoes and commit to ten minutes. If, after ten minutes, you still want to stop, you can. But more often than not, once you’ve gotten over your initial reluctance, you’ll want to stay running for longer. As Pychyl says, “Most of us seem to believe that our emotional state has to match the task at hand. But that’s just not true. I have to recognize that I’m rarely going to feel like it, and it doesn’t matter if I don’t feel like it.” So just take five minutes to push your difficult tasks along a little further. Who knows where it will take you.

3. Think of your future self

Psychologist Hal Hershfield looked at why we don’t save for the future by using fMRI scans and was able to show that people viewed their future self as a stranger. We can justify putting off doing something because it’s no longer our problem — it’s our future self’s problem. It’s amazing how cruel we can be to our future selves. If you knew your friend was going to have to pull an all-nighter to get through an uncomfortable mountain of work, you’d probably step in to help them if you could, right? So take that empathetic approach to future-you, too. The next time you feel procrastination creeping in, imagine your future self, and be kind. You’ll thank you for it.

4. Set a time limit for your task

If you have a large, complex task that you’re dreading, give yourself a scheduled, defined chunk of time to work on it. That way, instead of thinking, “This is going to take me at least two hours” — which makes the task feel scary and intimidating and only encourages you to keep putting it off — you’ll know that you only have to work on it for the allotted time. You don’t need to finish the task in this amount of time, and you’ll no doubt have to work on it a few times across the week. But doing it over 3 x 45-minute sessions is better than a stressed and panicked last minute rush. Bonus: this is a great time to try the Pomodoro technique, which involves setting a time for a block of time (usually 25 minutes) to work on your task and following it with an equally mandatory timed break (usually 5 minutes). Play with the proportions — 25:5, 30:10, 45:15 — until you find a ratio that works for you and your attention span.

No matter what you’re working on, keep your tasks moving and get more done with our task management template in Teamwork.

5. Don’t beat yourself up about it

The worst part about procrastination isn’t actually the impact on your work; it’s the impact on your self-esteem. Even if you manage to still meet your deadline, procrastination can make you feel really bad and really guilty. So when you’ve procrastinated, try to draw a line under it and move on. Use the situation to get insights that can help you be more productive going forward (as discussed in tip #1), but then be kind to yourself and just let it go. It won’t just make you feel better: putting your most recent episode of procrastination firmly in the past has been shown to reduce the likelihood of further procrastination. Pychyl analyzed a group of students around two mid-term examinations and looked at how self-forgiveness for procrastinating in their first exam influenced how they studied for their second exam. Those students who reported a high level of self-forgiveness after the first exam procrastinated less in studying for the second exam.

6. Disconnect from the internet

47% of people’s time online is spent procrastinating. Tim Urban calls this “The Dark Playground,” where “leisure activities happen at times when leisure activities are not supposed to be happening.” He goes on to explain: “The fun you have in the Dark Playground isn’t actually fun because it’s completely unearned and the air is filled with guilt, anxiety, self-hatred, and dread.” Eek! If you’re trying to make progress on a complex task, the best thing you can do is simply disconnect from the internet. Set your phone to Do Not Disturb; put your devices in Airplane mode; unplug your fax machine (then throw it out, because who uses a fax machine anymore?). If you find that’s too drastic, or if you still need to have some access to the internet in order to complete your tasks, start by signing out of your emails and using a social media blocking app like Freedom.

7. Think about the big picture

What are your goals? That might sound like an intense question, but it comes back to what Pychyl says about procrastination triggers: it can be hard to get motivated about a task that’s lacking in personal meaning. Sometimes we avoid doing things because they can’t see how they fit into our own bigger picture. But even tasks that feel trivial can have weight (and, what’s more, they still need to get done). So try to relate each task back to your own personal goals and ask yourself, “How can this help me develop personally or professionally?” For example, no matter how boring it is, the admin you’re avoiding will still build your organizational skills. And that difficult meeting you’ve been putting off can help you to improve your communication and mediation techniques. By focusing on what you can learn from each task — and how those learnings can ultimately work for you in the long run — you can turn boring into beneficial. We’d love to know your thoughts. How do you get the better of procrastination? Share your tips and tricks in the comments below.