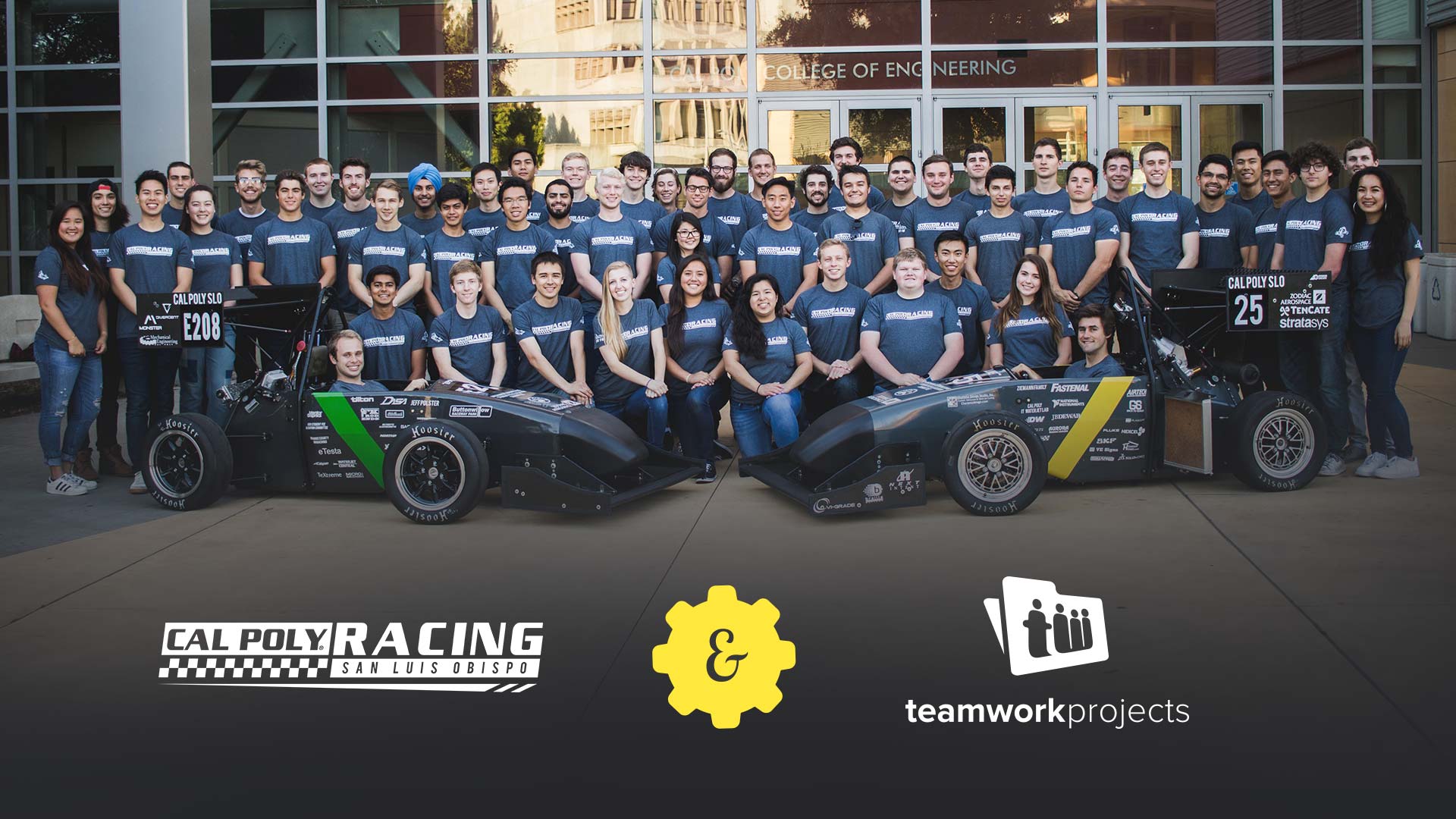 Cal Poly Racing is the largest California-based student chapter of SAE International, an organization for engineering professionals in several industries dealing with transportation, such as automotive, aerospace and commercial vehicles. Over eighty active members contribute to designing, manufacturing, and testing three innovative racing vehicles. The chapter’s Formula SAE team is one of the few teams to produce two competition vehicles, an electric vehicle and traditional petrol-powered vehicle. The team members obtain first-hand exposure to real-world problems using the same tools as industry professionals, from advanced composites tooling to project management software, the students learn all aspects of managing a successful team. In this case study, we spoke with Dalton Lasell and Adam Menashe, Team Manager and Team Lead for Cal Poly Racing, Formula SAE to discover how his team used Teamwork Projects to develop innovative cars in a fast-paced learning environment that teaches them useful skills in the technical realm and in project management.

“Teamwork Projects has really helped our team focus on building winning, cutting-edge cars instead of worrying about which tasks needed to be done next — and who was going to do them.”

Building any car from the ground up is a challenge, but at Cal Poly, there are a few additional variables that their racing team has to face. First, the Cal Poly Racing program operates out of several buildings that are located across the campus, which is one of the largest in the world. Design takes places in some buildings within the core of the campus, while the machine shops are a significant distance away. Second, students are working on the projects at completely different times, according to their class schedules and free time.

“During our design and manufacturing seasons, our team has hundreds of components and tasks to oversee, but they’re not in the same location at the same time. Face-to-face meetings were hard to plan, and when we tried to use Slack to request information from each other, the messages would get buried, leaving tasks uncompleted.”

At the start of 2017, Cal Poly Racing added another variable: building not one, but two cars from the ground up. This was the first time they had committed to constructing both electric and gas-fueled cars under the same management, and they had no project management tools to help them track tasks and team communication.

“When we looked at the complexity of creating two very unique cars, we knew we needed a better way to organize operations and help team members work together. We wanted to give them better tools to review progress on the entire project, keep designers and professors up to date, assign tasks as needed, and make sure everyone was held accountable for their work.”

The search for software that had in-depth features but an intuitive UI began immediately, and after reviewing several options, Cal Poly Racing went with Teamwork Projects.

“Students seemed to understand the UI really quickly, and the to-do lists used tasks and subtasks in a way that was clear for everyone to see. We knew that Teamwork Projects would help us keep moving things forward.”

Right away, the teams were able to start plugging in work assignments through specific tasks, organizing not only specific duties, but the entire schedule. Any follow-up questions or discussions about design or logistics are tied directly to the individual task or subtask, eliminating lost messages or confusion about which task needs more clarification. Teams are also finding it easier to delegate tasks using tags. When an entire project is mapped out, the team leads create templates with specific tasks for each part of the car’s construction so everyone can see how every responsibility links to the others. As they create these templates at the start of the project, they rely on tags to help them assign tasks to people with certain skill sets, and divide the work evenly. As the project progresses, tags give them a quick visual reference for to-dos and individual assignments.   Teamwork Projects is especially helpful during specific phases, such as the construction and design of the electronic systems, which are essential for the smooth, precise operation of each car. When schedules don’t align for key team members, clear communication tools, and task lists allow people to participate and coordinate their efforts seamlessly.

“Teamwork Projects is a big help to our management team by allowing us to easily check up on what people are working on, where their priorities are for the current week, and if they have forgotten any tasks. We can use Teamwork Projects to make sure they are on the right track.”

When the Cal Poly Racing teams are running smoothly, people have more time to devote to innovations that will give them an edge in competition. When schedules need to change or someone needs feedback on a new idea, the entire team has one place to go to share documents or discussion possibilities. Before Teamwork Projects, teams managed tasks with whatever tools they had, which could mean anything, like smart phone notes, spreadsheets, message boards, or even scrap paper. Nothing was consistent or easily shareable, which lead to a lot of mistakes and lost information. Depending on the team and who was managing it, the process could be really complicated or confusing. Now, everyone knows where to find plans, spreadsheets comparing test results — whatever they need. They’re not wasting time figuring out how to manage the information, they’re working. The improvement in development time has been so dramatic that Cal Poly Racing is making it mandatory for management and team leads — and it’s highly recommended to all of the general members who are consistently working on the two car projects.

“Our most valuable resources are people and time, and Teamwork Projects allows us to use our people more effectively. We’re saving so much time because we don’t have to remind people to accomplish tasks that they had forgotten were assigned to them.”