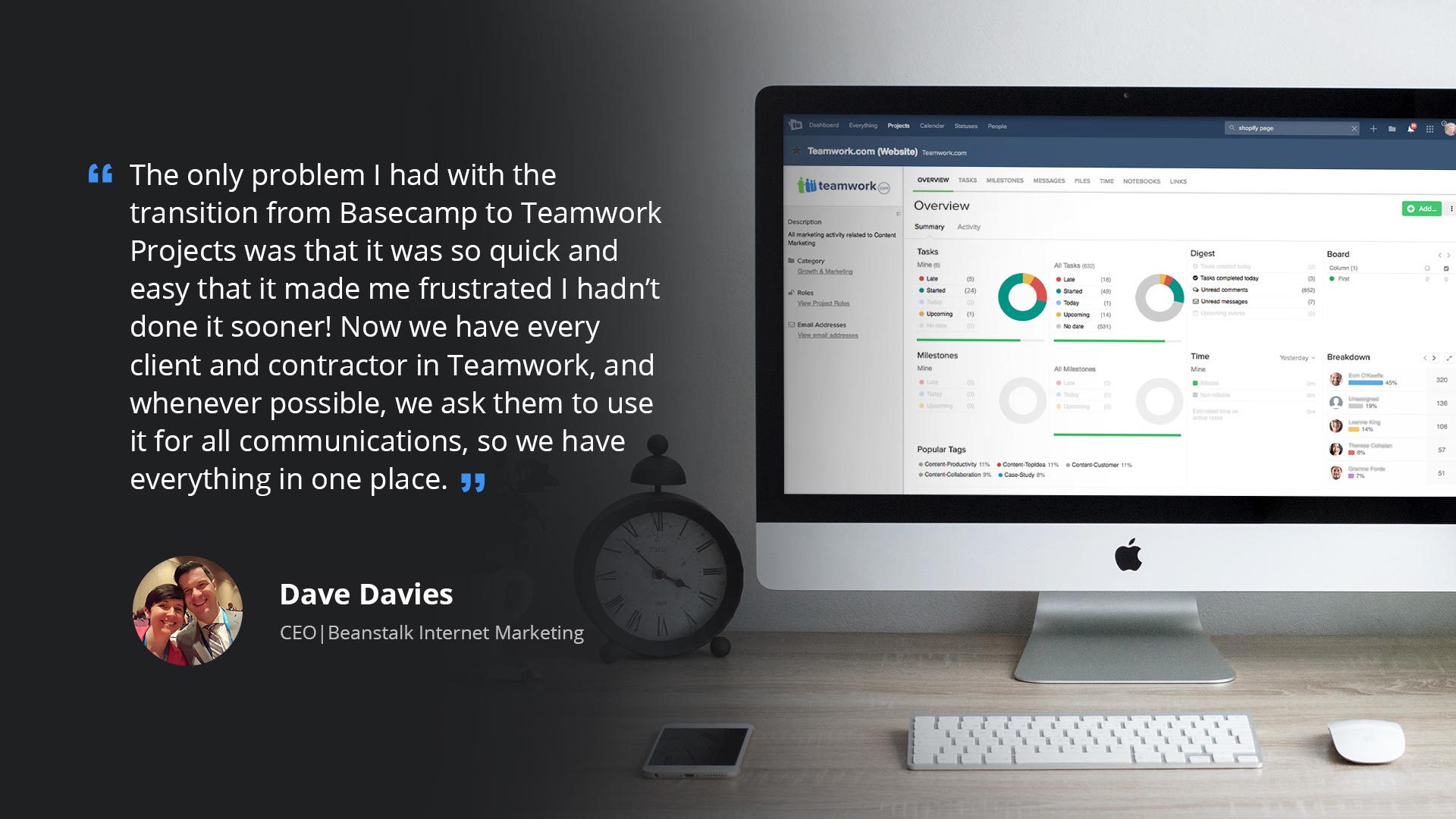 Beanstalk Internet Marketing is a full-service organic SEO and PPC management agency founded in 2004 by owners Dave and Mary Davies and located in British Columbia, Canada. They provide cutting-edge organic SEO strategies and thought leadership for customers looking to improve their search engine optimization.
Dave signed his team with Teamwork Projects at the end of 2012 because they kept running into limitations with Basecamp that were stealing time and efficiency from their projects. Once they made the switch to Teamwork Projects, communication and time-tracking tools made a fast, effective impact on their business.

“The only problem I had with the transition from Basecamp to Teamwork Projects was that it was so quick and easy that it made me frustrated I hadn’t done it sooner!  Now we have every client and contractor in Teamwork, and whenever possible, we ask them to use it for all communications, so we have everything in one place.”

When Dave launched Beanstalk Internet Marketing, he was in the same boat with many other agencies his size. Only a few project management systems were available, and the features they had weren’t adapting quickly to the growth of the businesses that were using them.
For Dave, this meant that he was lacking time tracking features that could give him accurate estimates on how many hours his team was investing in each client and each phase of their projects. Their billing system consists of a monthly retainer that’s based on a certain number of hours. Without the time tracking features, he didn’t have a good way to know how team members were spending their time.

“Basecamp was a decent-enough system for logging information, but I really needed tools for accurate time tracking and better transparency. I was spending too much time trying to collect information to show clients where time had been spent.”

For a couple of years, Dave experimented with the third-party solutions that Basecamp provided, but he needed a better way to manage his team and show clients exactly what value he was providing. After repeatedly asking for a time tracking system and struggling with workarounds, he decided to find new project management software.

Dave initially discovered Teamwork Projects by searching for a Basecamp alternative. He immediately saw features that Basecamp lacked which he had needed for his workflow. The time tracking and other elements of Teamwork Projects, like customer support, made the choice to make the switch easy.
Once the decision was made, the Basecamp importer transferred all of the data in just a few clicks. In just a few minutes, the Beanstalk Internet Marketing Team had all of their projects and workflows ready to go – with exactly the tools they needed.

“The superior time tracking and logging capabilities of Teamwork Projects allows us to easily show our clients what we’re doing and allows me to understand where time is being spent on campaigns. It makes me a better manager because I have a better idea of where time is being spent. It’s much easier to analyze what types of improvements in workflows that I can facilitate.”

In one case, Teamwork Projects was able to save the day after a client called complaining that Dave’s team hadn’t made enough progress his website in one month. Dave had ready access to the time logs, which showed that the client used up 11 of the 14 hours he had purchased by calling to talk to staff each day. Even though he had been warned that these consultations would count as billable hours, he hadn’t grasped the impact until the data was in front of him.

“Because Teamwork Projects lets us track these details easily, I was able to show the client where this happened, talk about the benefits to their paid campaign, and the benefits of sending messages through Teamwork instead of calls for their efficiency. Now our clients use the messaging features in Teamwork Projects instead burning through their hours, and we all get more done.”

Team members at Beanstalk Internet Marketing use both the time-tracking systems available in Teamwork Projects: the browser-based timer and the free add-on Desktop timer. Having both options allow team members to bounce between projects easily and keep accurate records of time without having to remember to click timers off and on. Team members on the go can also log time using the mobile app.

With detailed time tracking built into the software, the entire team is getting a deeper understanding of their workflows, and they’re able to pivot internally and explain their processes to clients. Overall, the team feels like they are able to make better decisions about task allocation because they’re realistic about how long each phase of a project will take.
Communication is also simplified using the built-in comment feature that’s tied to each task. Now that Beanstalk Internet Marketing has every single team member, client, and contractor using Teamwork Projects, every conversation is one place — no more hunting for stray emails for important information.

“The ability of staff and clients to access past messages, even when they weren’t included on them, is a lifesaver. With comments in Teamwork Projects, I can simply point them to the relevant threads, and off they go.”

Access to all of these features has also been good for the bottom line. Not only has pricing for Teamwork Projects been affordable, it has helped the entire team attain a level of efficiency that is saving them money every single day.

“Teamwork.com has without a doubt helped us increase revenue by saving time. Wasting 10 minutes searching for an email may not seem like much, but when it happens to each person several times a day over 20 days in a month, that’s a huge loss. With Teamwork Projects, our time isn’t evaporating anymore on little distractions like that. We know exactly what we’re billing for.”