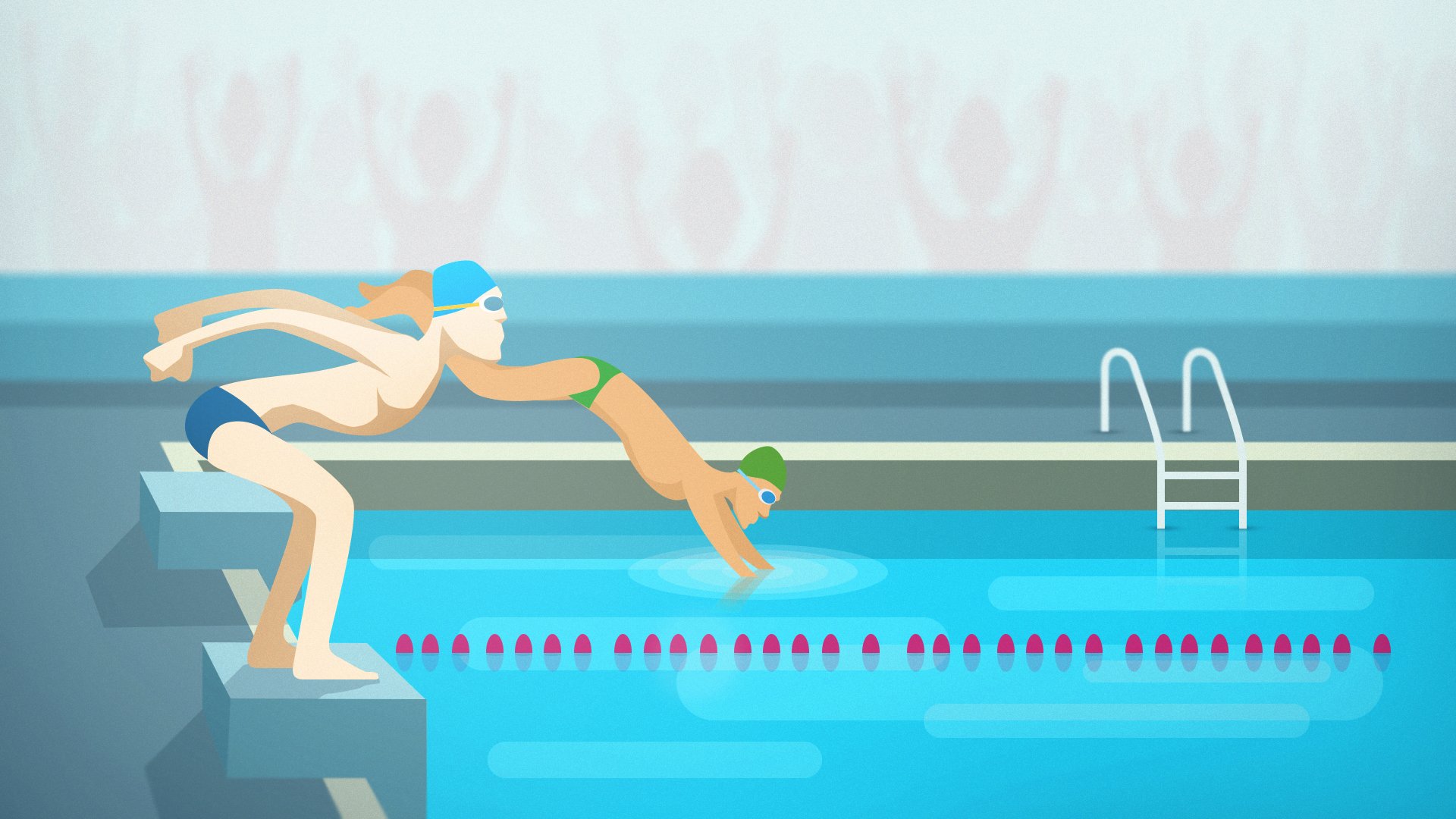 Strive for the Gold: How to Persevere like an Olympian

It takes focus on the final goal with continued commitment and ongoing preparation to shift the odds in your favor, whether you’re competing in the Olympic Games or presenting to your board of directors. It isn’t even about the gold, it is about the attitude and continued pursuit of excellence even in the face of obstacles, failure, and a slim chance of success.
We talked with 2012 Summer Olympics single kayak (K-1) competitor Caroline Queen about her perspective representing Team USA in the London games and the long road of training that is required to reach such a level in any sport. Caroline was on the U.S. National Team from 2007 to 2012 and part of the U.S. Olympic Team in 2012. Her unique experience as an Olympian lends an insightful perspective to the four elements present in those who strive for the best and persist in the face of adversity: focus, commitment, preparation, and perseverance.

It isn’t just about getting in the zone, but about continual and consistent focus from practice to triumph. Carefully defining both the plan and the strategy to achieve each step is an essential element of focus as well.
Focus is put to the test though when obstacles seem insurmountable or overwhelming to overcome. The one that most springs to mind for Olympians would be any kind of injury. Caroline Queen had her focus challenged in 2009 when she faced a serious knee injury. She was the youngest woman ever to make the U.S. National Kayak team, but this setback had the potential to derail her hopes of ultimately competing in the 2012 Summer Olympics.
Caroline’s own concentration is an inspiration. “It’s really all about focus –  One has to be able to route all of one’s energy to the task at hand. It’s challenging to clear your mind to that degree at times when more often than not an athlete is more than just an athlete – s/he’s a student, a family member, an employee somewhere, etc. being able to cut through the distractions and prioritize your run, game, etc. How do you do that? You find ways to set yourself up for success. Create spaces in your mind that let those other things drip away. Practice focusing in different scenarios so that you don’t find yourself caught off guard and unable to focus in competition. The brain should be your strongest muscle!”
Maintaining continued focus must also be aligned with confidence, or at least the illusion of confidence. Caroline says, “One thing that helps this is having great alignment between what you’re working on/trying to achieve with who you are and who you want to be. Your vision for your future self can always inspire you.” This is the wind at your back when self-doubt attempts to distract focus.
Caroline notes that it is important to encourage team members to consider their individual strengths and weaknesses, then devise actionable ways to leverage these while continuing to grow. She went on to explain, “I believe strongly that mental strength can get you through just about anything. With that said, it’s up to the individual to set the stage to maximize that power.”

There is a discipline, devotion, and sacrifice to reach the Olympics or any career pinnacle. This can often be in the face of adversity, which makes the commitment even more admirable. Accepting the challenges and facing them head on with renewed and undiminished dedication is the difference between looking back with a “what if” mentality and looking back with pride, knowing you did the best you could. For true commitment to any goal, it is necessary to have the right mindset, clearly defined goals and milestones, and ongoing accountability to the steps and people involved in the process. Beneath it all rests the bedrock of commitment to one’s self.
Caroline said about her own commitment to the sport and her training, “Being able to fully commit is absolutely critical. As I acknowledged before, this is a challenge as any single person plays multiple roles in life, but you have to make it work. To me, it boiled down to decision making. Each decision had kayaking factored into it. Leading up to London 2012, the decision making often centered around myself as an athlete versus me as a student – the question of where could I have access to the best coaches, water, and other resources was hugely impactful on my decision.
“Something I was extremely proud of as an athlete was the ability to make decisions that satisfied each part of my identity, but it’s impossible to do that sometimes. My decision to not pursue Rio 2016 actually came as a result of realizing that I couldn’t satisfy my whole self and really was not in a position to force a decision for my sport at the time. Maybe I’ll circle back to that for the next quadrennium, but I encourage a thoughtful approach, because if you’re not, there is no way you’re going to be able to perform at your best in anything in life.”
Few teams had to face as much adversity as the 1988 Winter Olympics Jamaican bobsled team. Not only did they face training and growth as a team, but also the skepticism that a tropical island could produce a winning Winter Olympics team. For the team, it was not about coming away with a medal, but about doing something that had never been done before and doing it the best they could.
In his Inc. article, Ryan Millar of Partners In Leadership explained that “Unfortunately, most people only focus on the end success or failure. I can’t tell you how many times I have been asked, “Did you medal?” I think a much better question to ask is, “What did you learn?””

Showing up day after day to practice and hone your skills is an essential part of perseverance. When it comes down to a final competition or vital presentation, being prepared for any and all outcomes or possibilities is what it takes to go beyond average training to complete preparedness. Each person individually and as a whole must navigate the changing landscape of a project or competition while building up the endurance to lead through challenges. Caroline lauds that even if you are an individual competitor or in business on your own, it helps to train with others.
One of the approaches Caroline used to prepare for her own Olympic experience was to, “leverage my innate strengths to their greatest degree. Efficient allocation of time and energy has always been an area of focus for me and something that I think about in a very natural way. I certainly was thoughtful about it while competing, but honestly I think I have made my greatest strides in this as a professional. There are only so many hours in the day and it’s up to you to make the most out of that time to ensure that you meet your deadlines and show up to that competition, presentation, whatever it may be like a pro.”
In many cases, what is learned through the journey of training and preparing is more valuable than any award. Sometimes, you can even get both, as was the case for the 1980 U.S. men’s ice hockey and 1998 U.S. women’s ice hockey teams.
Accordingly to Fritz Knapp who literally wrote the book on the success of these two teams, their coaches’ core emphasis on instilling teamwork and discipline as well as rigorous practices over time built the level of collaboration and success to gold medal caliber. It comes down to planning out planning out training and practices, designating milestones along the path to the goal, and communicating with everyone involved every step of the way. Caroline says that, “The energy that comes from [training or preparing with others] helps keep one focused and working hard.” Self-evaluation along the way is also key to adapting preparation to best suit the desired outcome. After all, if a training approach or step in the preparation process yields little to no return on investment, is it worth it?

In life and in sports, the field is ever-changing, so firmly grasping one’s own firmness of purpose is essential to keep a strong resolve that carries through to the goal. One more vital element is the continued and steady persistence in pursuing your goals despite all obstacles. This goes well beyond getting back up on the horse after falling off. The determination held within to remain focused on the end goal and each milestone along the way is fueled by perseverance.
Caroline is known for sharing her favorite Vince Lombardi quote, “Obstacles are what you see when you take your eyes off the goal.” She explains, “I’ve given this idea a great deal of thought lately as I watch many people with whom I trained and competed in my time as a paddler pursue and compete in Rio. Again, I think this comes down to decision making for me. I wouldn’t say that I’m someone who is stuck in her ways, but when I am committed to something I am sure to:

A good example of perseverance is from the 2000 Summer Olympics when Eric Moussambani debuted on the scene after only swimming for eight months and never having seen an Olympic-sized swimming pool. Because of a fluke that eliminated the two other swimmers in his heat, Moussambani swam alone in the pool and, in spite of struggling with the distance, he finished. Sometimes, a winning mentality is staying the course no matter the difficulty to ultimately reach the goal.

Whether the goal is winning a gold medal or just pushing your abilities to the limit to be the best at what you do, focus, commitment, preparation, and perseverance are the four elements that will help you get there. As much as winning matters, taking each step toward the goal with integrity, awareness, and determination is what really sets any Olympian up for long-term success.
We’ll end with one last piece of advice from Caroline Queen. “If you can’t figure out a way to anchor your long-term work and performance goals into the larger goals that you want in life, you need to think really hard about why you’re doing what you’re doing. You MUST have a purpose on which you can fall back when things get crazy.”

What approach do you take to reach your ultimate goal?
If you were to medal in any Olympic event, which would it be?